Ice Princess (often being called IP or Icey) is the princess of the Ice Kingdom and the daughter of the Ice King. She is not evil, and disapproves of her father's habit of kidnapping princesses. Unlike Flame Princess, she has a friendly relationship with her father and only has small arguments.

The Ice King was tired of being so lonely so he and Gunter made a daughter together, whom they would call Ice Princess. Ice Princess was made by with several ingredients that had to be put into a cauldron: the last remaining hair on the Ice King's head, crystallized sugar, thee different spices, everything ice, and Gunter secretly also put a hair of his in.

Ice Princess' appearance bears much resemblance to a younger Ice Queen from the fan-fiction story of the Ice King. She has light-blue skin, short white hair and normal white eyebrows, unlike the lightning sharped eyebrown of the Ice Queen. Her hair is wavy with curls instead of shaggy like her father's. She wears a small gold tiara with red gems and a neck band encrusted with a single blue gem in the center. She also wears a blue short sleeved ball gown, and light and dark blue shoes.

Ice Princess has Ice Powers and is the only one who didn't master them by wearing a crown but had them since birth. The main application of Ice Princess' powers are the large icy lightning bolts she shoots at her opponents. She can also manipulate the water in the air to create shields, and can even create torrents of icy weather at will. Also seen is that the Ice Princess is able to manipulate any ice in the area telekinetically.

Even though the Ice Princess does possess a weakness towards heat and fire, she can withstand it for a period of time if need be. she can create a strong ice dome that withstands the fire elemental's power for a longer period of time than one would typically consider the interaction between ice and fire.

Another common use of his Ice Powers is the Ice Princess' ability to fly. Unlike her father who uses his beard to fly she can actually fly because of the hair of Gunter she has inside of her. Penguins originally could fly and she got a hair from his wings, thus gaining that ability too.

It is conformed that the Ice Princess' powers are far greater than her father's as shown when she almost created another Ice Age. She learned in "Icy Blade" from Finn and Jake how to use fridjutsu and often uses it during combat, unlike Ice King.

At the surface Ice Princess may seem like a cold hearted person just like her father, but she is quite the opposite. From the day of her creation she quickly discovered that her father was nuts, so she doesn't take him too seriously. Ice Princess is most open to her "mother" Gunter but enjoys the company of others too.

She is good friends with Finn and Jake. However she has a better friendship with Princess Bubblegum, who secretly wants Ice Princess to take over the Ice Kingdom so Ice King would stop causing so many trouble. But although her father is an idiot she does love him and doesn't want to ruin his fun, although he sometimes ruins it for others.

Icey plays as a character in Adventure Time: Mirai Nikki. She plays the role of Mao Nonosaka who is one of Yukiteru's (Finn) friends at his new school. She is in love with Hinata (Marceline) and owns an apprentice diary called "Marceline Love Diary". 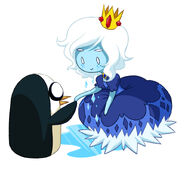 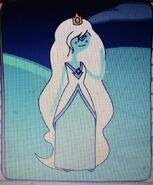 Add a photo to this gallery
Retrieved from "https://atfanfic.fandom.com/wiki/Ice_Princess?oldid=37391"
Community content is available under CC-BY-SA unless otherwise noted.