Fionna attempts to prove to Cake that Flame Prince isn't evil while trying to win his heart turns into a quest to stop him from taking over the Goblin Kingdom.

The show begins with the closing sequence from "Incendium": Flame Prince slaps Fionna's face and tells her to never mess with him again, leaving Fionna to say, "I think I have a crush." Cake then explains that she was trying to help Fionna get over her "Prince Gumball sad times" and that he is evil. Fionna becomes extremely mad at Cake for saying he was evil, and claims that she "peeped beyond his burning gaze" and that he is not evil, just passionate. Fionna convinces Cake to help her look for him. Cake begins to walk over the forest with Fionna on her head, trying to convince her to date another prince, and even suggests Wildberry Prince as an option. Suddenly a Brown Bird that was set on fire by the Flame Prince flies over them, and angrily directs Fionna and Cake to the location of the Flame Prince. Cake shrinks down and she and Fionna start to spy on Flame Prince. They view Flame Prince curiously playing with and burning a few flowers. Fionna is so attracted to him that she says that he looks like "the steam of a puppy's nose searching for ham in the snow." Cake tells her to snap out of it, and that he is burning cute little flowers. Fionna, all dazed and in love, simply responds "Yeah. He is like a cute little flower!" The conversation is stopped abruptly when Flame Prince hurts herself by putting his hand in a pond.

Fionna blows her cover to see if Flame Prince is alright and explains how she feels, causing him to glow brighter in excitement. Fionna is scared of the fire that Flame Prince produced and she puts it out, revealing that destroying the fire that Flame Prince creates actually causes him physical harm. Fionna, alarmed, asks if she is hurting him. "YES!" he replies, "That's all you've DONE!" He gasps, asking if Fionna is trying to hurt him, and if that is why she is following him. Fionna start to answer, but then says "I guess I AM technically following you..." This upsets Flame Prince, who runs away with Fionna still following him. She awkwardly says "I guess now I'm technically chasing you!" Cake chases after Fionna and the prince, before he burns down a tree and runs away. After Cake puts out the fire, Fionna shouts to Flame Prince "Wait! I want to chat it up with you!" He then appears and says he's ambushing them, and starts shooting fireballs at them.

The attack does not last long as Fionna confuses Flame Prince by trying to compliment him while he is attempting to kill them. He asks Fionna why is she tormenting him, to which she responds "I'm not trying to, I just like you. I think I… I think I LIKE like you. Listen, when I look at you, my brain goes... all stupid! And I just wanna hug you, and sit on the couch, and play BMO with you! I can't explain why, but I've never felt this way and I think we should be together!" This causes him to blush, and his flames grow. Fionna excitedly jumps up and down clapping, but Flame Prince resists, explaining that all Fionna has done is hurt him and that he thinks that Fionna is trying to impede him. In order to take revenge, he threatens to transform the Goblin Kingdom into his very own personal fire kingdom. He begins setting the entire field ablaze. Fionna tries to convince him not to before she and Cake are restrained by a wall of fire. Cake tells Fionna to fight him, but she refuses because she is "still into her." Cake asks which is more important: being with him, or being a hero and saving poor innocent Goblin folks. Fionna has no choice but to be a hero, and Cake informs Fionna of her plan to build fire-proof suits. Fionna and Cake return to their tree house and go into the garage in an attempt to find some raw materials to build their suits. Instead they find Neptret, who is playing hide and seek and claims she has been hidden for over 15 months, 4 days, and 9 hours. Neptret then helps build fire-proof suits for Fionna and Cake to wear (while Neptret sings "Working for the Master"). The suits are huge metal robot-like shells equipped with rockets and foam blasters, with Neptret himself acting as the helmet of Fionna's suit.

They all fly to the Goblin Kingdom where they try and reason with Flame Prince, but he continues his rampage. He tries to attack Fionna and Cake, but it doesn't work because the suits are fireproof. When Flame Prince attempts to shoot another fireball at Fionna, it is deflected into a goblin's cart (the goblin claims to have been born in that cart). Cake then attempts to put out some of the fires, injuring Flame Prince in the process. Neptret attempts to put out Flame Prince by hitting him with the foam blaster, but Fionna manages to stop Neptret from directly hitting Flame Prince. Instead the foam blasts Cake and extinguishes a few of Flame Prince's flames. Flame Prince becomes extremely angry, proclaiming "That is the last time you hurt me!" He grows into his beast form and continues to rampage through the Goblin Kingdom. A tear from Flame Prince's right eye reveals that he has been harmed both physically and emotionally.

Fionna then literally rips herself out of her own suit (never again wanting to see him hurt) and stands on top of it to shout to Flame Prince. She ignores her, causing Fionna to say that she failed everyone, despite Neptret's insistence that Fionna hasn't failed her. Fionna gives up, feeling she can never win the heart of anyone. She begins to cry and some of her tears fall on the flames of Flame Prince, which not only hurts him, but also catches his attention. Flame Prince comes over and watches Fionna cry for a short time, before stopping all his flames from destroying the city. Fionna coughs and is surprised to see Flame Prince watching her. He says he thinks he understands now, and that Fionna is a Water Elemental because she creates water (tears). Fionna tries to explain that she isn't, but Flame Prince (having trouble understanding the concept of her species) says, "Even if we like each other, we are only going to hurt each other." Fionna replies, "No, we don't have to! I can take it, I mean, can we try?" He replies "You would defy nature for me?" Fionna says, "Yeah, whatevs." Flame Prince hugs Fionna, burning her and causing her to tear up again. Flame Prince says goodbye, leaving in a trail of flames towards what seems to either be the desert or just a simple sunrise. Cake goes over to Fionna and tells her that all of the goblins were "barbequed," before revealing that she was just messing with her, and that she saved all the goblins. Cake asks how things went with Flame Prince. "He hugged me," replies Fionna, "then left." "Whoa," says Cake, "how did it feel?" Fionna ends the episode with the line, "It hurt." 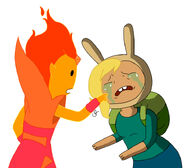 Add a photo to this gallery
Retrieved from "https://atfanfic.fandom.com/wiki/Hot_to_the_Touch_(Fionna_and_Cake_version)?oldid=38275"
Community content is available under CC-BY-SA unless otherwise noted.