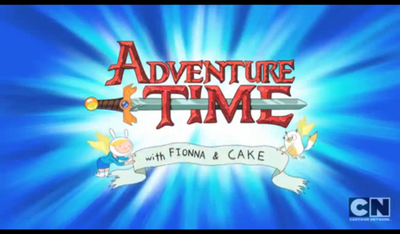 Fionna and Cake Return is a series created by Cartoon1 after the original episode of Fionna and Cake: Fionna and Cake and Bad Little Boy, in 2013. It is produced by Frederator Studios. The show is based on an original animated short titled "Fionna and Cake Return" which aired on Frederator's Random! Cartoons show and won an Annie Award for the Best Animated Short Subject of 2012. The series is about a girl named Fionna and a twenty-eight year-old, magical cat named Cake who encounter many strange adventures in the Land of Aaa. In 2013, Cartoon Network picked up the series, and it premiered with "sneak peeks" on March 11 and 18, 2013 followed by the official series premiere on April 5, 2013. This series is rated TV-PG, with a few re-rated episodes.

According to a Frederator blog post, Fionna and Cake was first pitched as a series to Nickelodeon, which airs most of Frederator Studios' other shows, but they passed on it twice.

Development of world and styleEdit

The series creator was influenced by the original series Adventure Time by Pendleton Ward, in 2011.

The characters are the same style as they were in Adventure Time with Finn and Jake series. As they were in the original episodes, Fionna and Cake, and Bad Little Boy.

The show has been renewed for six seasons.

Retrieved from "https://atfanfic.fandom.com/wiki/Fionna_and_Cake_Return_(Series)?oldid=13553"
Community content is available under CC-BY-SA unless otherwise noted.