The series is set in The Land of Ooo, which now spawns new places and worlds; Tamriel, The Minecraft - Verse, Elmore, The Park, and the futuristic city of Virturon. The hero, Lee Martes, becomes a member of the Team of Heroes, a group of heroes who hunt down villains of every sort. The main antagonist, Death, is about to steal the souls of the living, to increase his power, and end the world, along with his own faction, the Dark Brotherhood.

More characters that I am adding

The comfirmed roster of characters.

Possibly some antagonists, including the true villain: Darkness 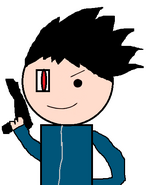 Ricky Munsen, a member of the heroes.

The main title card (thanks for the two pictures Maple Panda,), with Lee Martins sitting on a building with a plane and The Ark in the background.
Add a photo to this gallery
Retrieved from "https://atfanfic.fandom.com/wiki/Adventure_Time_Crossover?oldid=29361"
Community content is available under CC-BY-SA unless otherwise noted.