The Origin is the first movie by BuritoMan, and DarKingdomHearts together. It is a 2 hour movie special.

Finn, The Lich, and the gender-swaps unite to defeat a legendary villain.

The movie begins with Prismo and Coosmic Owl in the jacuzzi. Prismo claps his hands and the scene is zoomed from space to Ooo. Then the Narrator talks about the movie, and the clip starts. Hunson Abadeer is eating a sandwich. Out of nowhere, a giant shadow comes up and attacks Hunson. Hunson escapes to Ooo, but couldn't stop the shadowy thing to destroy the Nightosphere. Next, Martians on Mars are walking in the street, and the shadowy figure appeared again, Grob Gob Glob Grod tries to attack the shadowy figure by force, but couldn't stop it. He went to Ooo to escape, but couldn't save the martians. Next, Lumpy Space King and Queen are eating sandwiches. The shadowy figre appears again and tries to attack the queen and king. They escaped, but couldn't stop the shadow from further damage, as they went on to Ooo. Next, in Knapford City, Leonard was exercising in the park, when suddenly, the sky turned gray, the clouds went red, and all the other people melted. Leonard escaped to Ooo.

The screen is spliced to Lumpy Space Queen and King, Grob Gob Glob Grod, Leonard, and Hunson Abadeer are rushing towards Finn and Jake. Outside, Finn and Jake are feeding the two headed duck, but Finn sees the rushing allies. Finn and Jake ask why they are here. They answered at the same time, "Our kingdoms have been destroyed!". All confused, the people asked eachother what is happening. Finn and Jake calls up all their friends, and assigns a meeting.

The friends ask Leonard what does the creature look like. Leonard said that he did not see the character, since he was to scared to look at it. Jake asked what did it sound like. Leonard responded that it was a dinosaur-like sound, but it couldn't be a dinosaur, since they are already extinct. Finn says that its time for Lumpy Space King and Queen. Finn asks the two on how did it look like. They said that it was a demon-like creature a skeleton mask, and two giant horns on his head. Finn said that it was the Lich, but after the saying of the name, The Lich came out of nowhere, together with Billy. Billy and The Lich said that Lich's kingdom and Billy's den was destroyed. Then, an earthquake occured, and then it stopped in 3 seconds.

Then, PB's voice was heard, they went outside and see the Candy Kingdom on fire. Billy suggests that he, Finn, Jake, The Lich, and Grob Gob Glob Grod and Leonard must come together. The gang rushes toward the Candy Kingdom, and on the way, they spot Ice King and Ice Princess. Finn says that Ice King is up to no good, but Ice King says that he doesn't want his favorite princess to die. They arrive at the Candy Kingdom, there, they see the shadowy figure and sees that it was a villain. A legendary villain who once almost destroyed Ooo, but was stopped by Fabian and Inngrid, as Billy said. They go on to the Candy Kingdom, but was heavily defeated by the villainous monster. Leonard tried to attacked, but got killed by the monster. Finn screams his name, but Grob Gob Glob Grod interrups him, saying that he can acess the Land of the Dead and retrieve the soul of Leonard, giving Death a giant monster truck.

The screen switches to The Land of The Dead. GGGG says that he wants Leonard's soul back. Death says what does he have for him. GGGG creates a monster truck. Death laughs and makes Leonard alive. He and Peppermint Butler transport them back to the real world.

They go inside the castle and see PB lying on the floor with Elf Prince trying to wake her up. Ice King, Gunter, and Ice Princess were fighting the villain outside, but didn't give up. (Gunter throws bottles at him). Elf Prince explains that the monster, King Demonicon, was freed by the evil Snail possessed by the Lich. Everyone looks at the Lich but The Lich says that he de-possessed it already. Finn says there is another person who can possess people. They all shout "LOOOORD GRIMM!!!!!" The screen switches in Lord Grim's lair. They ask Lord Grim how could he do such a thing. Lord Grim explains that he needs to rule over the world, but doesnt want extra footage of himself. He then shouts to the narrator if he has heard him. So he immediatley asked them to leave.

Jake said that Lord Grim's a noob, and says that they should gather all people to a safe place. Finn asks Gunter, BMO, Marceline, and FP to watchover them, saying that none shall leave. They ask Ash to use his magic spells to get some food, but he says that he owes him a solid. Finn says its a deal, and Leonard and GGGG appears. Billy greets Leonard saying that its good to have him back, but he and GGGG should be incharge of the computers, cameras, and doors. Ash is lookong for food around the Grocery Kingdom, until he got fed up looking and transported the whole Kingdom beside the refuge. Lich says that he will transport the group, and King Demonicon to The Colliseum, out of Earth, for a mighty battle.

Lich however, needs two hundred Snails for him to possess and carry King Demonicon to the Colliseum, since he could only carry the group. The episode switches to the refuge. PB wakes up and kisses EP. She asked what happened. EP explains everything, but saying they need to ask Glob to help them. Marceline sings "Be Alert", for them to be more alert. Icey comes in, saying that her dad has a magic fanfic book, and that she will use her Ice Ninja powers to transport it here. She does it, and the book is in the table. She reads it and says the magic word, "Pancake Nevadamn Aaa Lo Caipo" and Fionna, Cake, Marshal Lee, PG, Lord Monochromicorn, Jacey, Elf Princess, Ice Prince, and Male Tree Trunks appear. The genderswaps greet the real ones, saying that Fionna, Jacey, and Marshal Lee shall go to The Colliseum to help out the gang.

Ghost Man says that he can teleport 3 people to The Colliseum, as he chants "Be Pancake An Use Colloseumus", as the three gets teleported. Finn, Jake, Billy, Jason, Lich are ready to fight the King, but as they see the gender-swaps, they are more encourage that they could beat the King, Finn charges, but steps in a landmine, causing him to fall off, Finn asked what was that, and The Lich says that he forgot to tell Finn that there are traps. Finn, annoyed, rushes with Jake, avoiding traps, charges at The King. Marshal Lee is carrying Fionna, as Jacey is floating & shooting beams at Demonicon. Finn and Fionna takes out their swords, and says that they're swords are cool, and they stab the King in his butt, the King screams.

Jacey and Lich casts a spell in the King causing it to freeze, and Billy punches the ice, breaking it. Suddenly, Finn's communicating system beeps and Elf Prince says a handy tip that the King has two lives. Upon that, the King regenerates back. Finn says that he knows one way to defeat the King, and Fionna says that she knows too. They get they're fries can, and throws it at the King. The King laughs at a puny attack, but out of nowhere, Hunson Abadeer in his monster form comes and destroys the King.

The Lich, Billy, Marshal, and Jacey's mouth opens to the ground, as they couldn't beleive they're eyes. Hunson Abadeer thanks the two for the fries saying that they will drive the gang home. The episode ends where Hunson says that he will take-out fries on McDonald for everyone. On the car, Lich says that he could reverse the dead people all along. The team looked at him angrily, but The Lich says that he never had friends and a fun time before. The movie ends where everyone is laughing. Cosmic Owl transports Lich to his domain, and tells the Lich that he has done good, and made him one of the Gods.

The King's eye opens and a voice calls, "You shall pay."

King Demonicon's spirit takes form of one of the Lich's vacant bodies and swears to kill everyone and take over the world. He sings "I Will Always Avenge", with his minions, but King Demonicon falls from his stunt and falls on a pile of minions. 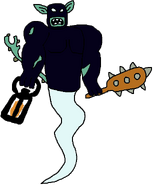 Add a photo to this gallery

Hello, dear viewers! Hope you enjoy this special. Like my facebook page, so I could do more damage on AT haters!

Link is in my wall.

Put your user name after the A: and type your answer.

2. Q: Should there be swearing?

Retrieved from "https://atfanfic.fandom.com/wiki/Adventure_Time_BuritoMan:_The_Origin?oldid=38284"
Community content is available under CC-BY-SA unless otherwise noted.