1001 Years is the twenty sixth episode in season 3 of DKH's Episodes.

Tells the story of Finn and Jake travelling in an Arabian themed parallel universe.

Finn and Jake started their day in their appartment located in the middle of the Sand Kingdom. When outside Finn rid Jake as a camel. They saw a large group standing around something. Finn asked a dirty mendicant what was going on. She responded that Princess Celosia has been kidnapped by the Dark Sorceress, and the Sultan will reward the ones that bring her back beautifully.

Before heading out Jake says they could ask some advice from the town's fortune teller. They head to Madame Bonnibel. As they enter and sit down Bonnie says that the journey they are going to make has ups and downs, however love will conquer in one way or another. Bonnie stands up and asks if they need help preparing their journey. Finn says why not. The three head out, as the servant keeps an eye on the place.

They first come across a stand where salesman Arvellon is standing. Bonnie says a weapon is required when going out of the city. Finn purchases a rusty golden sable. Bonnie leads them further to an old woman who sells herbs. They also buy some herbs from her. Bonnie says they should make it back alive now. Finn and Jake leave the city soon afterwards.

They had been walking for some time in the dessert now and decided to take a rest. Jake then sees something sparkling in the distance. He grabs it and sees it is a genie's lamp. Finn rubs on it and a genie appears. He explains the wishing rules and the boys are granted three wishes. Finn is happy but says he doesn't need any wishes now. Gene then says he will go back into his lamp, as it's too hot outside.

After some walking the two boys are dried out. Jake suggests to make his first wish so they won't be thirsty anymore. Finn refuses to do it, as he says he can keep going. Jake falls down, Finn picks him up but passes out shortly after. They awaken on another place, along with a man. After the boys regained conscious the man introduced himself as Simon Petrikov. He says they passed out and he gave them some water. Finn thanks him greatly for that. Simon asks where they are heading to. Finn says he is on a quest to save Princess Celosia. Simon thinks the two are very brave and wants to tag along, something the boys don't mind.

The sun was setting. Simon says they need to find a sleeping place as it gets very cold over night. They evetually manage to find a cave to spent the night in. However they are woken up by some roaring. When looking clearly a giant cave bat is in front of them. Finn draws his weapon and fights the bat while Jake defends Simon. However Finn is losing. Before it was too late Finn grabs the genie lamp and summons Gene. He asks to make the bat defenseless. Gene grants the wish and the bat turns into a little girl. Jake suggests that they should move on. Simon however objects and says that the girl needs protection. He says he had fun with the boys, but they should move on.

Finn and Jake continue their journey and decide to take a rest. Jake says that the temple of Dark Sorceress should be nearby. Finn says they should drink someething first. He grabs out a canteen which quickly gets snatched out of his hands. Jake tries to attack him but instead gets stabbed in the stomach by the thief. He takes the bag of Finn and flees. Luckily Finn has Gene in his lamp. Instead of wishing his stuff back, he wished for Jake to recover from his wounds. Now thirsty they decide to move on, else it would keep becoming more difficult.

They eventually reach a dark temple which is guarded by two Lemongrabs. Finn and Jake ask permission to enter. But when they don't get that, Finn draws his sword and cuts the heads of the arguing guards off. They keep arguing after though. Finn and Jake enter and encounter Dark Sorceress with Princess Celosia locked up in a lamp. Finn and Jake fought against Dark Sorceress but it became too much of a challenge and he grabbed the lamo to let the woman disappear.

Finn and Jake free Celosia. Finn and Celosia kiss each other instensively. After done Finn confronts Gene. Gene says he used his wishes in a good way, not purely for himself but also for others. And with that he needs to return to his lamp. Finn gives the lamp to Celosia who frees him again. Celosia first wishes to be back home with everybody. Instead of using a second one she wished for Gene's freedom. And out of kindness Celosia could do one other wish. She wished  ahs and Finn would be together for always. 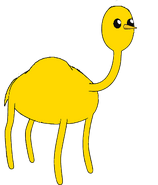 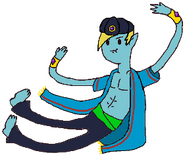 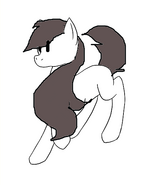 Dusk the Ghostly Horse
Add a photo to this gallery

Retrieved from "https://atfanfic.fandom.com/wiki/1001_Years?oldid=25587"
Community content is available under CC-BY-SA unless otherwise noted.